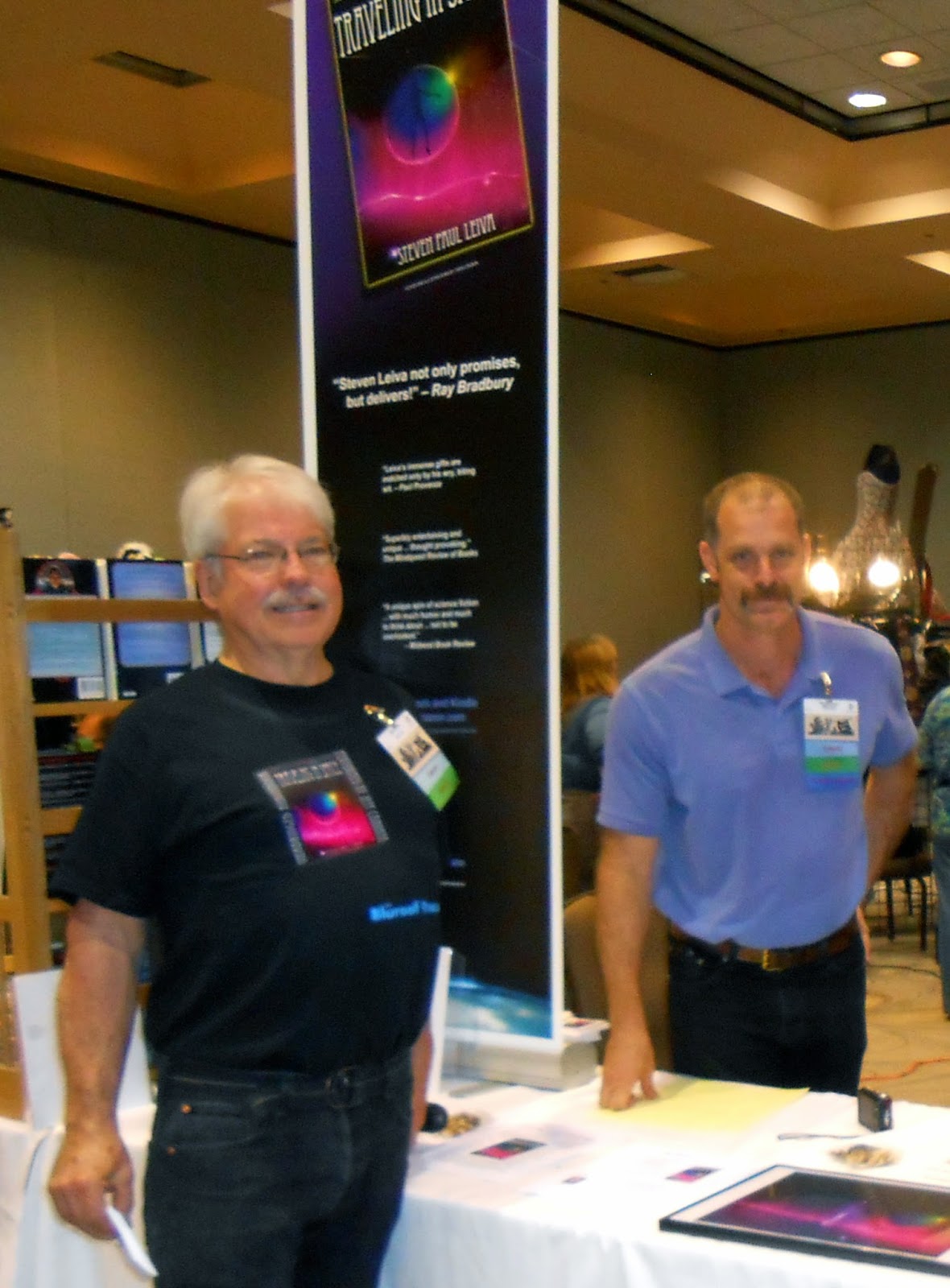 This blog is going to be a bit of a love story. Not romantic love, or love of family, or love of country, nor any of those obvious loves. This is about a love that has no adjective to modify it that I can think of. I may have to make one up, if I’m clever enough.


It’s a love for two men, but they could just as well have been two women, or a man and a woman. On the giving end is myself, a writer -- an artist, let me be bold enough to say. On the receiving end are Dave Doody and Mitch Scaff, the principals of Blüroof Press, which has published my novel Traveling in Space in its print and ebook editions, and now as an audiobook.


I love them because they not only published Traveling in Space, but champion it.


I have discovered that the greatest joy outside of practicing the creative act, is to find a champion or two to support it. In days gone by and long receded, that usually meant a patron. Someone powerful with access to wherewithal who could commission or support your work. The state, the church, the aristocracy were the usual players. Such patronage was offered for several reasons, I assume, not the least being institutional and personal self-aggrandizement. It would also be nice to think that some of the patrons had at least a modicum of admiration, even passion for the work. And since it would be nice to think it, I think I’ll think it.


Later, as the commercial world became ascendant, the patrons were more likely to be Captains of Industry, or the trust-funded children of Captains of Industry, funding art to hang on walls and place in halls; music of a serious bent meant to play for crowds so they could admire the sounds -- and the patrons who gifted them with it. The same might be said for dance danced without the aid of taps.


Writing, though, has rarely benefited from patronage. It’s not impossible, but certainly useless, to hang a book on your wall, and fairly impossible to share in a bow before a crowd. And although there certainly have been grants and fellowships for writers, in the main, writing gets its support from people wanting to make a profit from what monies they advance -- grudgingly it often seems  -- to the writer.


There was a time, though, when publishers were happy with just enough profit to stay in business, finding that profit in the widely popular, and willing to allow the widely, and wildly, popular to underwrite their efforts to bring to a public, no matter how few in number, works they had a passion for, hoping that, in time, popularity might follow. Not just for the profits, but because they felt it would be just, a right thing to happen in the world, a deserved recognition.


But such is no more. Or, rare. The huge corporate publishers demand profit, which is their right, from the products they put out. That is not to say that within their walls are not individuals who love and champion certain works, and know how to work the system to get them a shot, but they don’t seem to be a controlling factor. And, of course, there are small presses with dedicated owners who only want to publish what they love. But even they, at the very least, like a good profit now and then.

Does a writer really need a champion to get published? Not in today’s world. Writers now have the option, if they find no one to champion their work and bring it to print out of love -- for the work or for the profit -- they can always self-publish. There’s not a damn thing stopping anyone from being published these technological days -- in print, in ebooks, even in audio. But it is much like being alone on a raft going down a river. Will it lead to a big, beautiful city? Or rapids ending in gigantic falls? In either case, it would be nice to have someone along to hang onto.


I use to be a champion. It wasn’t in the art of writing, but a wholly other form of creative expression. One I was incapable of doing. I had no financing to offer, but hard work and a strong voice I gave to it. And I loved it and certain talents who I admired. To be frank, the love, much less appreciation, was not returned.


So I am determined to love and appreciate my champions.


I have, at times, I’m sure, been a pain in the ass to the Bluroof Boys, Dave and Mitch. But, nevertheless, they have supported my work with words and actions that have moved me greatly. I could do it alone. Dave even offered to help me do it alone, with no remuneration coming to him. But I did not want that, I wanted people on my raft so that I would know that I was not deep in self-delusion. This was important to me.


Dave and Mitch, with great sincerity and, I hope experiencing some fun and pleasure, have given me solid support. This is all the more important when you consider that Bluroof is not a huge company (yet), and these are gentlemen of intelligence and interests who are busy and do not lack for other ways to fill what spare time they have. I’m sure they wish to make a profit on Traveling in Space, and I hope they do. But they talk to me only of their love of the book, and their interest in getting it in the hands of as many readers as possible.


Or listeners, for that matter. It was Dave’s idea that we do an audiobook. And he supported my decision not to record it myself, and to share the profits with the talent I needed to do the audiobook as I saw fit. Dave patiently waited while the production took more time than anticipated to complete. Dave enthusiastically responded to the final work.


And it was Mitch and Dave who decided we needed to launch the audiobook at a public event, choosing the BayCon 2014 science fiction convention. It took time and money and effort with no guarantee of a quick payoff. But the Bluroof Boys did it.


Now that we are home from BayCon, I hope they felt it was worth it. I certainly do. I was daily thrilled by the energy they put out; the words of support for my work that Mitch repeated several times in my ear; seeing Dave talk to convention goers about the launch of the audiobook, thrusting Traveling in Space bookmarks into their hands.


They say writing is a lonely art. But it’s a wonder when the promotion of art isn’t.


And now, a bit of a album of selected photos of our time at BayCon 2014. I like to think of it as a family album.


On Sunday, Jeff Cannata, who performs Traveling in Space on the audiobook joins us

Jeff joins me to read the words of Ray Bradbury as I present a talk on Ray Bradbury: Masterheart of Mars


Back in the Dealer's Room

On sunday we have the Big Raffle