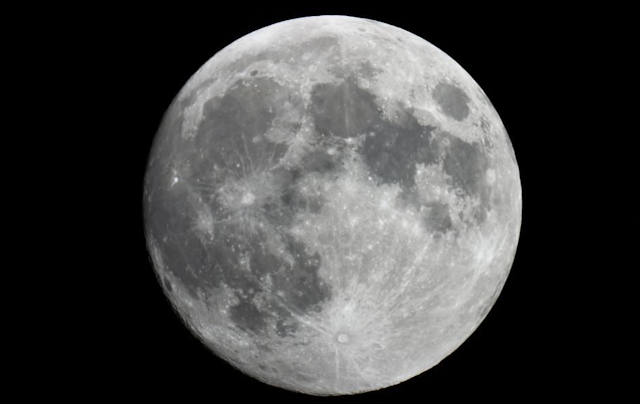 This is the week of celebrating the 50th anniversary of humankind’s (well, it wasn’t going to be in other kind’s, was it?) first landing and walking on the moon (July 20, 1969). And I am allowing myself to feel the twitter-like vibrations of thrill. 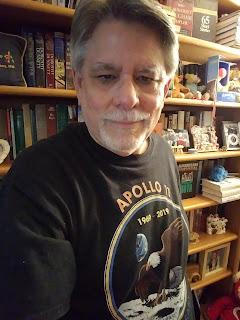 Those who know me well know that I have been moon mad from a very young age. It’s not quite been full lunacy, I don't quite wear my moon madness on my sleeve, but I have been known to wear it on my chest. 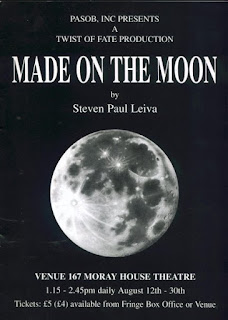 And it did lead me to write my play, Made on the Moon, which had its world premiere at the 1996 Edinburgh Festival Fringe.


The play was staged by a young company of actors from London and ran for the three weeks of the festival. It received a fairly positive four-star review from The Scotsman, which I don’t remember in full, but I do remember that the review said that the play “...would not be dismissed from the stage.” Which meant, I think, that the reviewer appreciated it as a fully theatrical work of art. 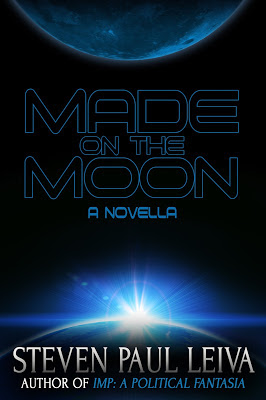 Despite that assessment, I dismissed Made on the Moon from the stage a couple of years back and adapted it as a novella, which has been published by Crossroad Press.

It received some positive reaction as well, and these I remember.

"With just enough satirical elements to emphasize the blurred line between logic and insanity, true fans of Science Fiction will find a kindred attachment with the Stanley Lewis character. It is a hero's journey, a relentless determination to dream the impossible. Made on the Moon by Steven Paul Leiva shows us that reaching for the stars is not just a dream, for some, it is a way of life." -- Ricky L. Brown, Amazing Stories Magazine

“Leiva has crafted a satire – perhaps a self-satire – with a very warm heart. If you’ve ever dreamed of flying in space or walking on the Moon, you’ll get the point of this story and you’ll love every page.” -- Russell Blackford, author of Science Fiction and the Moral Imagination.

In both versions, the first half of Made on the Moon has very definite autobiographical elements. The second half most definitely does not! And in writing it I learned that I was, without a doubt, a writer. And I learned what it means to fashion fiction that, it is hoped, resonates beyond just the twitter-like vibrations of thrill. For the piece started out, many years ago, as a simple polemic in support of the space program, but became something much more complex than that. Something that allowed me to explore myself with a cold eye, and society with an even colder one. All while having a few laughs along the way.

But, still, it’s genesis was my fascination and love of the moon and of our successful effort to reach it—even if our motivation to do so was not as pure as I would have liked. 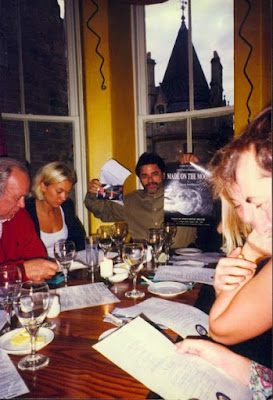 At the wrap party for the Edinburgh run, the cast and crew presented me with our poster all signed by them—and a title page from my playscript autographed by Edwin “Buzz” Aldrin, the second man to walk on the moon!

How the hell did they pull that off?

While the company was rehearsing Made on the Moon in London they heard that Edwin "Buzz" Aldrin, the second man to walk on the moon, was on a UK book tour for his novel, Encounter at Tiber (co-authored with John Barnes), was now in London. Tom Knight, who played Stanley Lewis, the protagonist of the play went to one of Aldrin’s book signings and asked him to autograph the title page. It was pretty gutsy of them, asking an author to autograph someone else’s work. But it was certainly appropriate as Aldrin has a few lines heard offstage in Made on the Moon. Being both gutsy and appropriate, I was deeply moved by the gift and damn appreciative. 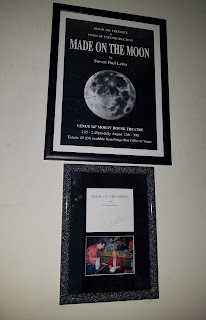 And it has remained a prized possession. 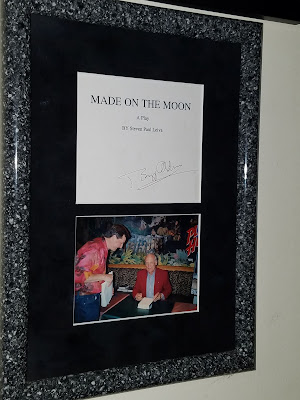 Later that year back in Los Angeles, I had the opportunity to meet Aldrin during his American book signing tour. I accompanied my good friend, producer and manager Ken Kragen (The Smothers Brothers Comedy Hour; the Kenny Rogers “Gambler” movies) to the headquarters of The Planetary Society where Aldrin was having a special book signing for members. Ken is a lover of astronomy and the space program and had bought at an auction one of Aldrin’s flight suits, which adorned a mannequin in his office for years. 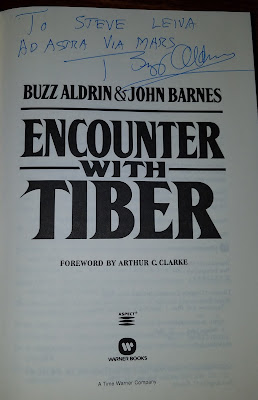 I thanked Aldrin for signing my play and, of course, now had the pleasure to have him sign a copy of his book. After all, it was only fair.

I had another opportunity to meet and speak with Aldrin when we were both attending an awards banquet at which Ken Kragen was being honored as a “Father of the Year.” Which, by the way, was well-deserved. Aldrin was gracious and we briefly talked about going to Mars. Not he and I in particular, of course, but good old humankind in general.

The last time I saw Aldrin was during a special screening of François Truffaut's film version of Ray Bradbury's Fahrenheit 451 during Ray Bradbury Week in Los Angeles which I created and produced in 2010 in honor of Ray's 90th birthday. The screening was sponsored by Hugh Hefner and the Playboy Foundation and took place at the Writers Guild Theatre in Beverly Hills. Aldrin came to the event and I took him into the green room to see Ray before the screening. It was rather grand to see the great space dreamer in conversation with a great space doer. 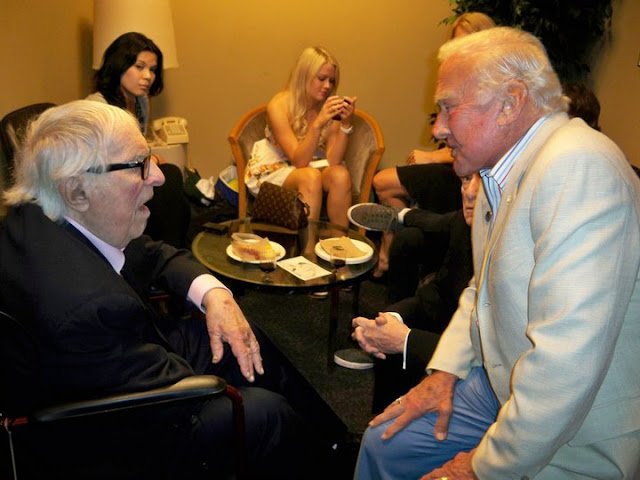 Made on the Moon, the novella is available as an ebook on Amazon. Crossroad Press has discounted it to 99 cents. Hey, that’s nowhere near what it cost to go to the moon! Check it out.